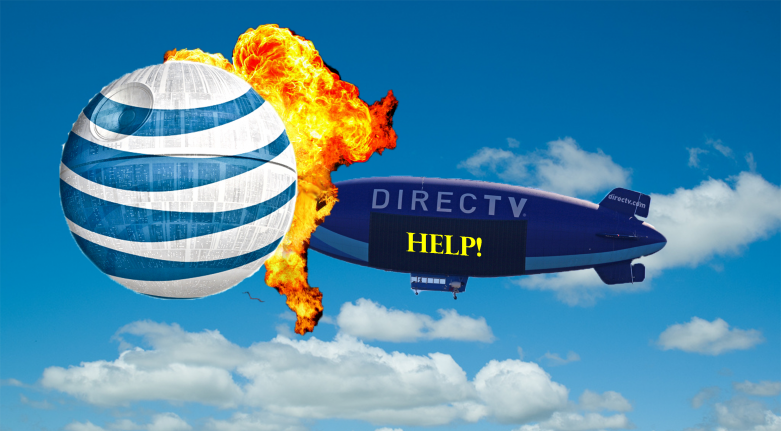 How the AT&T–DIRECTV Merger Fails the Antitrust Test

When AT&T announced its takeover of DIRECTV, one thing was missing from the agreement: a regulatory breakup fee.

Given the increasing moxie of Washington antitrust authorities, this omission is a little peculiar. AT&T had to pay T-Mobile a whopping $6 billion breakup penalty, a concession prize for the phone giant’s failed $39 billion takeover.

The absence of the fee is clearly a reflection of AT&T and DIRECTV’s confidence that they can push this deal through. DIRECTV CEO Michael White said that he and his board of directors are “fully confident this deal is going to get done.” AT&T CEO Randall Stephenson said that “the more we peeled back the onion, and the more we saw how DIRECTV went to market versus how AT&T went to market, the more confident we became that this does pass regulatory muster.”

Ultimately it doesn’t matter whether these CEOs are confident about this nonsensical waste of $67 billion. When regulators start peeling back this rotten onion for themselves, they’re going to have one message:

When it comes to merger reviews, regulators today are most concerned about so-called “horizontal” deals – mergers between two companies that directly compete for retail customers.

This is one of those.

In fact, antitrust authorities such as the U.S. Department of Justice actually have a guidebook to follow in these cases — the Horizontal Merger Guidelines. Those guidelines include the Herfindahl-Hirschman Index (HHI), the analytical tool that regulators use to evaluate these deals to determine if the transaction is likely to be anticompetitive. The HHI is a measure of market concentration that factors in the number of firms in a given industry and their respective market shares. Drawing on decades of experience, the regulators are able to use the HHI to gauge whether a deal will enhance market power and lead to trouble.

For example, the DoJ considers markets with an HHI below 1,500 to be “unconcentrated.” This is equivalent to a market with roughly seven firms of equal size, and a merger here wouldn’t raise many, if any, competitive concerns. Markets with HHIs above 2,500 are considered “highly concentrated.” This is equivalent to a market with four equal-sized firms (or those with just a couple of really big firms and a bunch of much smaller ones).

Mergers that result in this level of concentration are concerning as they usually come with enhanced market power. Consider the AT&T/T-Mobile transaction: the post-merger HHI for this deal would have been 3,100, an increase of nearly 700 points from the pre-merger value.

According to the Merger Guidelines, “[m]ergers resulting in highly concentrated markets that involve an increase in the HHI of more than 200 points will be presumed to be likely to enhance market power.” While the DoJ is careful to note that its HHI analysis is not “a rigid screen,” it’s going to look skeptically on any deal that concentrates markets to this level.

So how does the AT&T-DIRECTV deal do under this test?

To see why, we first need to understand another part of the antitrust analysis: defining the geographic product market. For the purposes of horizontal pay-TV mergers, antitrust authorities consider the geographic market to be local: customers can only buy what’s available at their physical locations.

In many instances, antitrust authorities will look at the same geographic area that advertisers do — the so-called television DMA, or Designated Market Area. There are 210 such media markets in the U.S., ranging from very big (the 7.5 million TV homes in the New York metro area) to quite small (Glendive, Mont., and its 4,000 households).

AT&T offers its U-Verse pay-TV service in several dozen DMAs, with about 99 percent of its subscribers residing in 64 of the nation’s 210 media markets. And in each and every one of these markets, AT&T’s takeover of DIRECTV violates the DoJ’s guidelines.

In 61 DMAs, the deal would increase the market’s HHI value by more than 200 points and result in a highly concentrated market with a total HHI over 2,500. That indicates this deal is “presumed to be likely to enhance market power,” which the DoJ rightly says is bad. Such enhanced market power is “likely to encourage one or more firms to raise price, reduce output, diminish innovation, or otherwise harm customers as a result of diminished competitive constraints or incentives.”

In another three DMAs, the deal would result in a post-merger HHI above 2,500 but only increase the HHI between 100 and 200 points. However, this doesn’t mean there’s nothing to worry about, as the DoJ says such transactions “potentially raise significant competitive concerns and often warrant scrutiny.”

The infographic below shows the 64 DMAs where AT&T’s DIRECTV takeover violates the antitrust guidelines. While half of the U.S. population resides in these markets, AT&T currently only markets its U-Verse TV service to a portion of the homes in these areas — totaling about 20 percent of all U.S. homes. 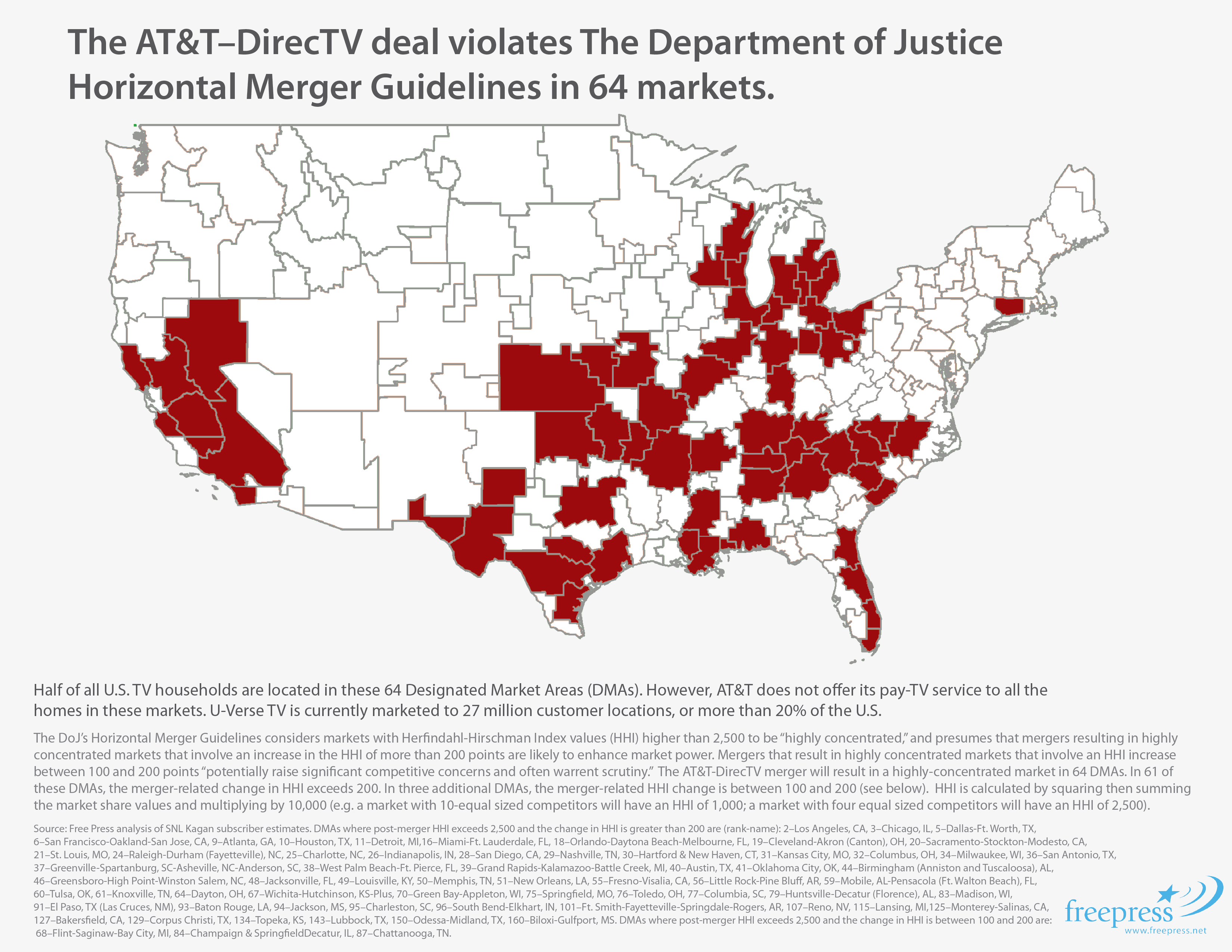 For these 64 DMAs where AT&T offers its TV service already, the AT&T–DIRECTV deal would increase the HHI by an average of 450 points and result in an average HHI above 3,300.

That’s pretty terrible for consumers. But this result is actually an understatement of the true impact of the merger. In any given DMA, there are multiple pay-TV providers that don’t actually compete directly. For example, in the Dallas market (AT&T’s home town) the major cable company is Time Warner Cable, but some areas in that market are served instead by Charter or Suddenlink. In general, people have access to their cable company, two satellite companies (DIRECTVand DISH Network), and for about a third of the country, the phone company’s pay-TV service (e.g., Verizon FiOS, AT&T U-Verse, CenturyLink Prism TV).

The key fact in all of this is that the satellite providers basically offer service everywhere, because they are not constrained by the need to run a wire to every house they serve.  So even though AT&T doesn’t offer its U-Verse pay-TV service everywhere that it offers telephone and Internet service, U-Verse does face competition from DIRECTV everywhere that AT&T offers it.

When these non-overlapping service areas are taken into account, we see that this deal would increase the HHI by more than 1,000 points, resulting in a post-merger HHI of nearly 4,000.

For those consumers that live in these 64 markets, this is a recipe for terrible service and higher prices. But it’s also bad for the rest of the country, too, as AT&T, with its less than stellar reputation for customer service and innovation, will become a nationwide satellite TV provider.

Three years ago when AT&T announced its intentions to buy T-Mobile, I made the statement that “if antitrust has any meaning left in America, then the FCC and the Department of Justice ... must swiftly reject this unthinkable plan to restore Ma Bell.”

Well, antitrust apparently does have meaning. Regulators rejected that deal in part because they found that a reduction in the number of “providers from four to three, likely will lead to lessened competition due to an enhanced risk of anticompetitive coordination.”

But this is the same situation that AT&T’s latest deal presents: for nearly a quarter of the country, this deal would reduce the number of pay-TV competitors from four to three. And the level of market concentration post-merger would be worse than it was in the T-Mobile deal.

This deal stinks. Not only is it supremely expensive and wasteful, it’s also a competition killer. Regulators should reject it, and DIRECTV’s mergers and acquisitions team should kick themselves for not insisting on a breakup penalty.