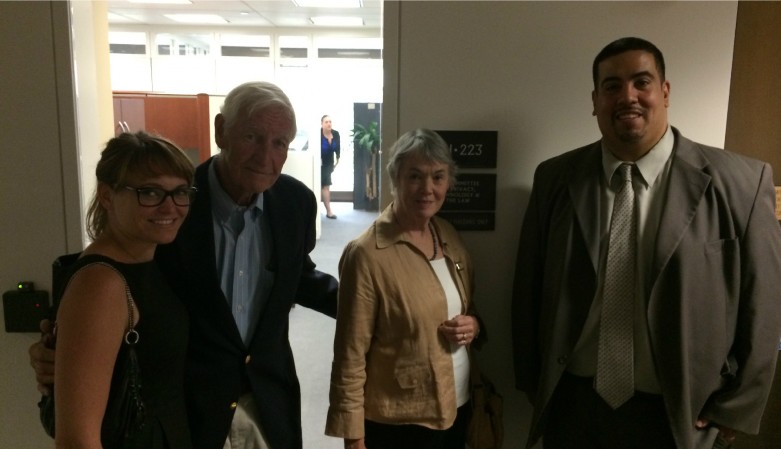 Our nation has long used surveillance to control marginalized and dissident voices.

It’s an issue my colleagues and I recently learned a great deal about from activists who exposed our nation’s shameful surveillance operations 40 years ago. And it’s an issue that’s relevant today given the surveillance state’s targeting of communities of color.

Last week, we had the honor of escorting two longtime activists — John and Bonnie Raines (pictured above) — to Capitol Hill to discuss the heroic efforts of a group of anti-war activists who uncovered J. Edgar Hoover’s illegal spying operations in 1971.

If you’ve never heard of this married couple before, you’re not alone. There’s a good reason for that.

In 1971, the Raines were two of eight members comprising the Citizens' Commission, which set out to investigate the FBI.

The Commission wanted to prove the government was spying on anti-war and civil rights activists and broke into the FBI field office in Media, Pa., to search for evidence.

The files they removed from the FBI office confirmed their fears.

The scandal made nationwide news and resulted in the formation of the Church Committee, marking the first time Congress investigated U.S. intelligence agencies.

The Church Committee’s findings led to the creation of safeguards to curb the power of domestic intelligence agencies. Unfortunately, those protections have eroded since Sept. 11, 2001.

The eight burglars who broke into the FBI office in 1971 were never captured and for decades their identities were kept secret. But last January, Medsger released a book — The Burglary: The Discovery of J. Edgar Hoover’s Secret FBI — that identified five of the eight burglars, including the Raines.

The story is also captured in a new documentary, 1971, that screened last week in Washington, D.C., and brought the Raines to town.

My colleagues and I accompanied the Raines and Johanna Hamilton, the director of the film, to several Senate offices to discuss their stories and how their efforts to expose the FBI 40 years ago are pertinent today in light of the NSA’s surveillance operations.

The government’s failure to rein in the abuses of J. Edgar Hoover was a major reason why the activists broke into the FBI office. And it’s why the NSA spying scandal troubles them. Government surveillance, they argue, has a chilling effect on the public.

Many communities of color have felt that impact, a topic that was addressed last week at a network gathering on racial justice and surveillance at the annual Allied Media Conference in Detroit.

Free Press, May First/People Link, and the Center for Media Justice organized the gathering to examine the relationship between race and surveillance and to understand what happens when communities of color are the targets of government surveillance.

More than 50 groups and individuals took part, including the American Civil Liberties Union, the National Economic and Social Rights Initiative and the Stop LAPD Spying Coalition.

The participants noted that surveillance of communities of color is rooted in a desire to maintain social control in the service of white supremacy. It’s also rooted in the economic exploitation of oppressed communities — a practice that benefits corporations and the wealthy.

In activities and small-group discussions, participants discussed the motives behind surveillance and explored what could be done to eliminate its abuses.

The Center for Media Justice's Steven Renderos speaks to participants.

The tree of knowledge activity addresses the root causes of surveillance.

A major goal of the day-long gathering was to craft a Points of Unity statement that outlined the common themes that emerged. After a spirited discussion, participants agreed to the following four points. They are:

As one of the organizers of this event, we hope the Points of Unity statement will lead to discussions across the country on how to put a stop to the discriminatory surveillance state. And we hope those fighting against government surveillance will take a moment to read the book or watch the movie about the 1971 burglary to learn lessons that could inform our activism today.

Surveillance will continue unless activists are willing to speak up — or, as the Raines did, put so much on the line in the fight to protect our individual and collective rights.