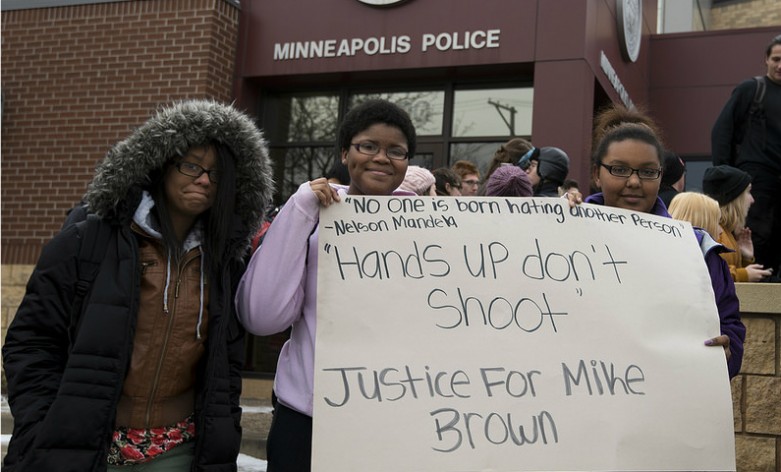 As Black communities emerge from the shadows of criminalization, hashtags like #BlackLivesMatter have jumped off the computer screen and into the street. Beyond sparking a long-awaited new civil rights movement, they are also catalyzing an amazing 21st-century model for civil rights activism.

The genius and passion of this "next generation" of civil rights leaders set the nation ablaze in response to the murders of Oscar Grant, Trayvon Martin, Renisha McBride, Michael Brown, and other Black people. Their public cry that all Black lives matter has echoed far beyond the narrow halls of mainstream cable news. On the open Internet, this new generation of leaders has crafted an amazing story, in their own voices, that rejects the criminalization and lifts up the humanity of Black communities.

The reason the open Internet has been such a powerful tool for change for this generation of leaders is because, unlike other media platforms, broadband has historically been protected by nondiscrimination rules. These rules, called Net Neutrality, make the Internet the most democratic media platform in history. While most of us cannot own a cable news station, every one of us can own a website.

But the ability of Black communities to use the Internet to sustain this growing movement is threatened. Earlier this year, a D.C. circuit court struck down Net Neutrality rules. The court told the FCC, the agency that regulates the Internet, that the only way to legally prevent discrimination online and enforce the Net Neutrality rules that make the Internet such a powerful tool, is to reclassify broadband as common carrier service -- a public utility, like electricity or water. The alternative, a privatized Internet where discrimination is legal, is a terrifying concept. Imagine if companies got to decide who gets to have water and how much water they could use, and then could open or close the flow of water based on how much money they made? Who would suffer most? In Detroit, tens of thousands of poor people know the answer to that question.

If Mr. Hal Singer has anything to say about it, that's what will happen to the Internet.

Mr. Hal Singer, Progressive Policy Institute Fellow, believes the FCC should not reclassify the Internet. In fact, he participated in an FCC meeting with the Urban League, the Minority Media and Telecommunications Council, and the conservative think tank American Enterprise Institute (AEI) to lobby against Net Neutrality. Guess who else is affiliated with AEI? Shall I dish? It's Charles Murray, author of the Bell Curve, a 1994 book that argued that human intelligence is the best predictor of crime and poverty. Aka: Black people are not intelligent and that is why we are poor and incarcerated. Good company, eh?

In the aftermath of President Obama's groundbreaking support for reclassifying broadband as a common-carrier service, Mr. Hal Singer published an article in Forbes.com suggesting that President Obama should not take communities of color for granted when it comes to an open Internet.

I agree, but not for the reasons Mr. Singer suggests. Let's look at each of his major arguments:

1. FALSE: Rather than push for reclassification, public-interest groups should focus on helping communities of color get a bigger foothold in the digital economy.

Though I'm sure many applaud Mr. Singer's apparent concern for the economic well-being of communities of color, his perspective may be a bit skewed. Allowing broadband companies to discriminate against us is not the best way for communities of color to gain a foothold in the digital economy. It is, however, the best way for ISPs to make super-profits. So, to be fair, it is good for someone -- just not us.

Net Neutrality rules are no more extreme than other rules that have historically prevented legal discrimination, like Brown vs. the Board of Education and the Voting Rights Act. And even those rules were not strong enough to keep our schools desegregated, secure voting rights, or prevent a pattern of racialized mass incarceration. In the 21st century, as Black bodies fall like leaves to the ground, we must do every thing we can to protect Black lives and Black voices.

Lordy. Instead of rules that would allow low-income Internet users access to the whole Internet -- like we have now -- Mr. Hal Singer would like communities of color to "keep an open mind" about low-priced zero-rated broadband plans that restrict users to social media sites, and prevent them from accessing educational content online. Does Mr. Singer believe that poor people only need and deserve access to entertainment, and not the information we need to organize, and save our very lives? There is no discount deep enough to make us buy into discrimination. More than 100 "next generation" civil rights groups agree, and have endorsed the call to reclassify broadband as a common carrier, protected by strong Net Neutrality rules.

If you are looking for the privilege in this scenario, you should check the public tax records that document the six-figure salaries of the top CEO's at the nation's oldest civil rights organizations. But you didn't hear it from me.

Mr. Hal Singer knows, just like every other consumer in the United States does, that cable prices have been increasing for a very long time. Yet, Mr. Singer thinks we should hand over control of our Internet content to the same cable companies that already inflate our bills. Consumers, especially consumers of color, do need to fight rising Internet prices, but we will need to do that no matter what. Mr. Singer also knows that a simple congressional renewal of the Internet Tax Freedom Act would guarantee against local, state, or federal governments imposing Internet-specific taxes.

It's not reclassification that would expose broadband customers to new fees, it's the refusal of multimillion-dollar ISPs like Comcast, AT&T, and Verizon to pay their fair share. Hey, I know what could prevent the rising cost of Internet service! These super-sized companies could absorb the cost of doing business with dignity. Perhaps that is too much to ask.

5. FALSE: Reclassification could risk some portion of the $75 billion in annual investments by ISPs in America that support high-paying jobs in the communications sector.

The assertion by the GOP and ISPs that say non-discrimination rules will cost communities of color jobs and broadband investment in their neighborhoods is just a scare tactic. In fact, wireless companies know well that they have to invest in the growing consumer base of people of color to survive. More importantly, while incumbent ISPs like Comcast, AT&T, and Verizon would rather not be forced by Net Neutrality rules to compete with emerging start-ups, the competition that has made the technology sector possible would only be supported by Net Neutrality rules grounded in Title II authority.

Instead of trying to scare Black Internet users -- and others -- into supporting rules that are against our self-interest, perhaps Mr. Singer should spend some time explaining why ISPs are among the most hated companies in America.

I Believe That We Will Win

I am a Black organizer and Internet user. Like most people, I know what it means to pay bills I can't afford. And I know that while it may not be the most profitable choice for ISPs, equity is a cost they should be willing to bear.

However, instead of agreeing to pay their fair share, ISPs like Comcast and their cronies are coercing poor people with threats of an "Internet tax," holding our broadband infrastructure hostage, and working with the conservative lobbying group American Legislative Exchange Council (ALEC) to expand the already vast tax loopholes while our families and our cities go bankrupt. These are the companies Mr. Hal Singer and others are fighting to protect. These are the companies whose campaign donations have swayed many a Congressional leader and broken many a union. And they are one really big reason Chairman Tom Wheeler's FCC has delayed a vote to reclassify the Internet.

But I believe that we will win. We are a new generation of civil rights leaders, 21st-century Internet users with our hands and our digital voices raised, calling out #WhichSideAreYouOn? Our response? We're on the freedom side. We want our digital voices protected by real Net Neutrality. We want it whether we access the Internet from a computer, a tablet, or a phone. We know we can only get it if the FCC reclassifies broadband as a common carrier.

That's why 10 of us will head to the FCC in January 2015, with the Media Action Grassroots Network, to share our stories. Because we want the Internet we deserve, and we want it now.