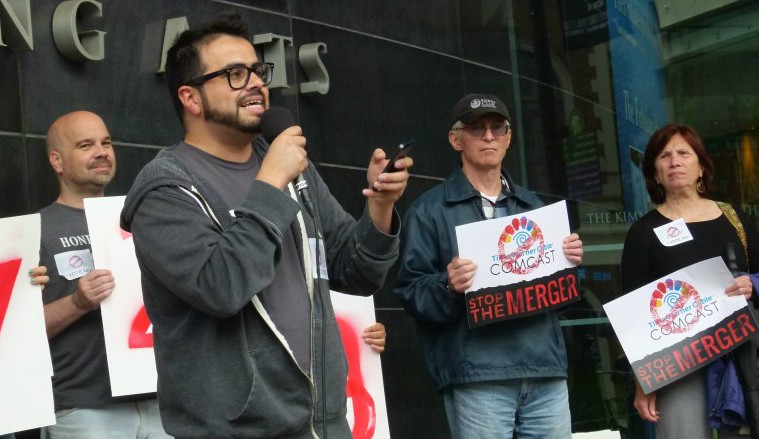 Comcast's decision to pull the plug on its $45 billion bid to buy Time Warner Cable is a huge victory for the Latino community and other communities of color.

The cable giant announced the move on April 24 after the Federal Communications Commission and the Department of Justice informed the company that they were against the deal.

The merger would have combined the two largest cable providers in the country, giving Comcast unprecedented control over both pay-TV and high-speed Internet access markets.

But in the end, approving such massive media consolidation was unthinkable.

As in the Net Neutrality fight, media justice, public interest and consumer rights advocates deserve tremendous credit for stopping this merger and for making sure the voices of everyday people were heard.

Groups like the Media Mobilizing Project, the Center for Media Justice, Common Cause, Consumers Union — as well as our organizations, Presente.org and Free Press — delivered that message with protests outside of Comcast's headquarters and before the California Public Utilities Commission, visits to members of Congress, and a million petition signatures to the FCC.

For our communities, broadband access is of central importance. Allowing one company to control nearly two-thirds of the U.S. broadband market would have contributed to growing economic and media inequality for Latinos and other communities of color.

It’s simply shameful that just 56 percent of all Latino households and 62 of Black households have broadband at home. A lack of competition among providers has resulted in high prices, with too many families unable to afford their monthly broadband bills. As a recent government report found, cost was the main reason why Latinos did not have home broadband access.

The city of Philadelphia, home to Comcast, serves as a cautionary tale.

It ranks nearly dead last (23rd ) in broadband adoption among the 25 largest cities in the country. It's also the nation's poorest big city, where 44 percent of Latinos live in poverty. Nevertheless, the average monthly Comcast bill is still a hefty $154.

As families in Philly struggle to pay their broadband and cable-TV bills, Comcast is living large; it earned nearly $70 billion in revenue last year.

To win approval of the merger, Comcast tried to portray itself as a benevolent company seeking to close the digital divide via its Internet Essentials program.

The program provides a 5 Mbps Internet connection for $10 a month to poor families with a child in a school-lunch program. But Comcast has received a great deal of criticism for making it difficult for families to meet these eligibility requirements. In addition, the Internet speeds the program offers are simply too slow. And despite all the publicity the program has received, the high barriers to participation resulted in just 17 percent of all eligible households signing up.

In addition, the Internet Essentials program also served as another reminder that high-speed broadband access remains unaffordable for too many Latino families.

Comcast's attempt to win approval of this merger while the FCC was deciding to adopt strong and enforceable Net Neutrality rules also illustrated the dangers of giving one company so much control over online content. As the Commission noted in its Net Neutrality order, broadband companies have the incentive and ability to discriminate online due to a lack of competition for high-speed Internet access.

The merger would have also allowed Comcast to exert even greater control over the cable-TV market since it could limit how programmers distribute their content on cable and online.

This is why the fight over Net Neutrality is not only critical to protecting the open Internet, but to challenging the cable industry and the barriers that prevent Latinos from owning their own cable networks or finding distribution for their content.

If the merger was approved, Comcast would have been the sole cable and broadband provider available for up to 90 percent of all Latino households. Rep. Tony Cardenas (D-Calif.), the lone House member to oppose the merger, called the decision by Comcast to drop its merger bid "a victory for consumers, for content creators and for the economy of our nation."

Now that the merger is dead, it's time to fight for federal policies that promote greater competition in the broadband and media industries and undo the damage caused by years of consolidation. Our community needs affordable high-speed broadband access and the ability to fully participate online, along with a media system free from discriminatory barriers.

This is why we hope Latino civil rights groups like the League of United Latin American Citizens will rethink their strategy of supporting massive mergers and opposing Net Neutrality. Even though they claim to be doing right by our community their policy positions actually work against it.

Many groups bristle at any suggestion that their position is influenced by the corporate contributions they receive. But it's difficult to understand how giving monopoly-minded corporations greater control over the Internet and our media system benefits the community.

One look at the state of Latinos in the media industry, including our level of broadband adoption, and it's plain to see that this strategy hasn't worked.

Thankfully, there's growing awareness among Latinos and other communities of color about the power these companies have over our daily lives, and our ability to access the news and information we need to advocate for our own well being.

This is why we have to continue to make our voices heard in the fight for the media and communications system we deserve.

Arturo Carmona is the executive director of Presente.org, the nation's largest online Latino engagement organization. Joseph Torres is the senior external affairs director for the public interest group Free Press and coauthor of News for all the People: The Epic Story of Race and the American Media.