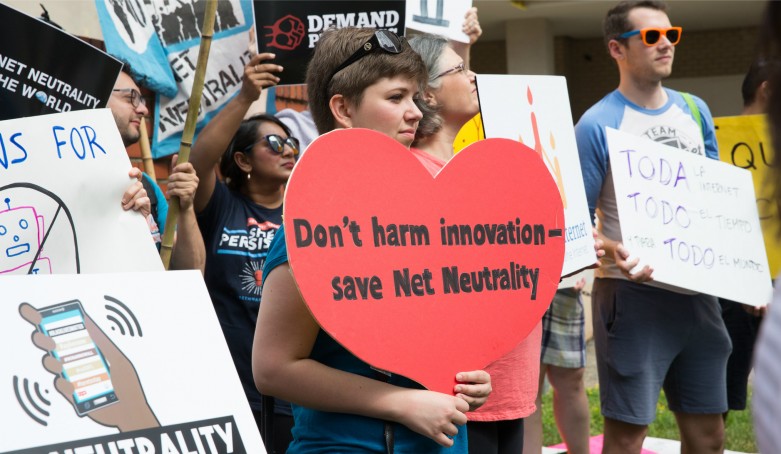 The FCC's Order Is Out, We've Read It, and Here's What You Need to Know: It Will End Net Neutrality and Break the Internet

You can read the full text here. The short version is that Pai’s order takes the Net Neutrality rules off the books and abandons the court-approved Title II legal framework that served as the basis for the successful 2015 Open Internet Order.

The FCC is scheduled to vote on this dangerous proposal at its meeting on Dec. 14.

Pai’s draft is a lot of things: thin on substance and reasoning, cruel, willfully naive — and it’s everything that ISPs like AT&T, Comcast and Verizon could have wanted (and more). But what it’s not is sensible or grounded in reality. It will take away every safeguard we need to protect the open internet we’ve always had, giving ISPs the power to kill off their competition, choke innovation, charge more for different kinds of content, suppress political dissent, and marginalize the voices of racial-justice advocates and others organizing for change.

We’ve had just a few hours to read this dud, launched by the FCC the day before Thanksgiving. Here are a few of the many lowlights in the draft order and a quick explanation of why they’re wrong.

While we’ll have more analysis in the days to come, this is our first take. And if no one puts a stop to Pai’s plans — with more than 200,000 rightly outraged internet users calling lawmakers and urging them to do just that on Tuesday alone — we’ll have even more to say on this when we take the FCC to court.

Under the existing regulations the FCC passed in 2015, we have clear bright-line rules prohibiting harmful behavior by phone and cable companies. Those rules are coupled with the strong but flexible safeguards that the 2015 order built in for other schemes ISPs might use now or invent in the near future to interfere with internet traffic.

Pai’s order trashes all of those and leaves only scant transparency rules in place.

With the flimsiest of justifications, Pai plans to “eliminate the conduct rules adopted in the Title II Order — including the general conduct rule and the prohibitions on paid prioritization, blocking and throttling.” (See ¶ 235 of the draft order. We’ll quote passages in the draft like this throughout this post.)

The new order leaves internet users entirely without protections, relying on ISPs to behave and avoid exploiting their status as gatekeepers to the entire internet. Pai and his Republican colleagues at the FCC want to do nothing short of legalizing internet blocking and discrimination by cable and phone companies. They flip-flop back and forth in the order between predicting that this won’t happen; saying that maybe some other agency could put a stop to it if it does (¶ 259); and, in other instances, actually rooting for it by praising the supposed benefits of pay-for-play prioritization and internet slow lanes (¶ 252).

The new order makes it clear what kind of power is being handed over to ISPs by all but inviting them to offer “curated services” in the name of ISPs’ own freedom of speech rather than their broadband customers’ rights (¶ 262).

In other words, as we’ve known since details of this plan started to emerge last week, the Trump FCC wants to let the most-hated and worst-rated companies in America block and edit speech on the internet.

Pai makes the willfully naive argument that even in the absence of effective oversight and prohibitions against blocking and discrimination, “transparency substantially reduces the possibility that ISPs will engage in harmful practices, and it incentivizes quick corrective measures by providers if problematic conduct is identified” (¶ 205). He then leans on ISP statements that these companies have “publicly committed not to block or throttle the content that consumers choose” (¶ 260).

When it comes to letting ISPs divide the internet into fast lanes for the few that can pay the extra toll, and slow lanes for everyone else, the order actually celebrates the idea.

Only at this FCC and in the boardrooms of some big ISPs does anyone believe that slowing down websites and apps counts as “innovation.”

But this is the “trust the cable company” future that Pai envisions for the internet. The draft order puts a ridiculous amount of faith in ISP promises. Before firm rules on solid legal footing were put in place by the 2015 order Pai wants to abandon, ISPs blocked content, throttled websites and used their power to rig the market in their favor.

This new FCC order would return us to a world where ISPs have a green light to block, slow down and limit quality access to any websites or applications they want.

Free Press has written the book on the continued need for the laws that protect people’s communications rights on the internet. Those rights don’t change just because the technology has evolved — or at least they shouldn’t change.

The laws that protect these rights are in what’s called Title II of the Communications Act. And despite current Republican officials’ selective memory loss on this, these laws were updated on an overwhelmingly bipartisan basis in both chambers of Congress in 1996 to establish the legal definitions and duties that still do and still must apply to broadband service.

Broadband internet access is what the law calls a “common-carrier transmission service.” That means it lets internet users transmit the information of their choosing, to and from the points of their choosing, and that it must do so without unreasonable discrimination by the carrier that transmits the content.

That’s how broadband customers perceive the service that ISPs offer and sell to them, and that’s the service we all need to have any chance of connecting and communicating with each other and accessing all the internet has to offer.

The draft order fails in its vain attempt to refute Free Press’ statutory analysis on these questions. A proper read of the legislative history, and of FCC steps and missteps past, explains Congress’ true intent and the meaning of the law. But the best the Pai team can muster are ahistorical references to Clinton-era interpretations of an internet ecosystem long since gone, along with a smattering of ISP talking points and legal arguments shot down in court just last year.

Talking about how the Commission treated AOL’s dial-up internet access service in 1998, and pretending that this same reasoning should apply to ISPs like Comcast and AT&T that control the physical networks we use to get online today, just won’t cut it (¶ 63). Nor will the absurd claim that just because ISPs transmit internet speech and information, the broadband access line itself must be an information service too (¶ 29).

These are simply attempts to ignore the reality of modern broadband internet services that people depend on today — and that still need rules guarding against the network owners’ incentive and ability to discriminate.

The Obama FCC followed the law and fulfilled its congressionally mandated duties by returning to Title II, and to the proper understanding of broadband internet access as a telecom service. That decision was upheld not once but twice by the federal appeals court that reviewed the agency’s reasoning.

But the Pai FCC wants to throw all of that out of the window, then throw up its hands and say we can’t have rules anymore.

Set aside for a moment that ditching Title II means the FCC is weakening or abandoning all sorts of other duties it has — from promoting broadband affordability and deployment (¶ 189) to protecting consumers from privacy invasions (¶ 178). The Pai FCC’s trust in an understaffed and overburdened Federal Trade Commission’s ability to police the privacy policies of internet companies is misplaced and dangerous.

By abandoning the Communications Act, and possibly punting oversight of ISPs’ Net Neutrality promises to the FTC (¶ 140), Pai is turning his back on the FCC’s sound legal framework for preventing discrimination online.

This FCC is abdicating its responsibilities and using the worst legal arguments it can find to justify its actions.

One of the main arguments the Pai order offers for all of this upheaval is the supposed harm that a Title II legal framework has wreaked on broadband investment. This harm is a fiction Pai invented, backed only by a handful of ISP lobbyists and shills who’ve been willing to lie through their teeth or concoct the supposed evidence for this alleged economic downturn (¶¶ 90-91).

The fact of the matter, as we’ve shown dozens of times now, is that broadband investment doesn’t turn on regulation alone. It doesn’t plummet simply because the FCC restores the same kinds of protections against discrimination that have been kept in place continuously for a wide range of Title II voice and broadband services for the past several decades.

The numbers bear this out: Broadband investment on the aggregate has gone up in the two years following adoption of the 2015 Open Internet Order. Most individual publicly traded ISPs have spent more than they had in the two years prior to the 2015 order — with companies like Comcast investing about 26 percent more in that time.

This increase in investment has occurred even as ISPs saved money on buildout thanks to efficiency improvements from new fiber and wireless technologies.

Measuring aggregate investment alone, by a single industry sector alone, is the wrong metric anyway. Broadband speeds actually improved at a rapid clip after the 2015 order, and that’s what the FCC should be measuring here: the services that broadband customers get, not just the dollars that ISPs spend.

Investment also boomed for companies that use the internet to deliver their services, including but by no means limited to internet video sites and online pay-TV substitutes, all of which had the certainty under the 2015 Open Internet Order of knowing they had an open pathway to customers on the internet.

But all of this makes no difference to Pai and his cronies. They casually conclude that ditching the statutory framework Congress established for broadband will somehow increase investment in networks (¶ 98), despite mountains of economic evidence to the contrary and the fact that ISPs routinely told their own investors that Title II and Net Neutrality had no impact on their spending.

Where We Go from Here

Pai’s order is heavy on destruction and light on sound reasoning. We know why: Title II simply works; courts have ratified it twice; Americans across the political spectrum and in both political parties are overwhelmingly in favor of those protections; and it’s crucial for allowing the voices of marginalized groups and activists to reach society at large.

The new order is the result of a broken process at the FCC used to reach a faulty and false conclusion on the facts and on the law. The FCC has lost in court every time it’s attempted to prop up open-internet protections on flimsy legal-authority claims. This time should prove no different, and we’re already preparing our legal challenge.

The FCC will vote on Pai’s internet-destroying plan at its Dec. 14 meeting. There’s still time to let the FCC know what you think. You can also urge your members of Congress to condemn Pai’s plan, as hundreds of thousands of you have already done in the past 24 hours.

If we turn up the pressure, there’s a small (but growing) chance we can put the brakes on Pai’s bad ideas before the FCC votes. So keep fighting and speaking out — and don’t fall for Ajit Pai’s lies.