Join the Fight to Stop the Comcast-Time Warner Cable Merger

Comcast wants to buy its chief rival, Time Warner Cable. If approved, this deal would create a television and Internet colossus like no other.

Comcast is the country’s #1 cable and Internet company and Time Warner Cable is #2. They both regularly rank at the bottom of the barrel in customer-service surveys. Put them together and you get one subpar giant offering service to two-thirds of U.S. homes.

The Federal Communications Commission and the Justice Department have the power to stop Comcast. Tell them to block this merger today.

The combined company would be an Internet and cable juggernaut with unmatched power to crush competition and hike prices for consumers. In fact, Comcast has admitted that prices will go up.

This deal would make Comcast the only traditional cable provider available to nearly two-thirds of the U.S.

This deal would allow Comcast to control a third of the cable and satellite market, and half of the bundled video/Internet market.

The merger would allow Comcast to use its market power to dictate the terms of broadband openness, cost and access at a time when the U.S. lags well behind other developed nations on each of these measures. With Comcast in charge, we’ll continue to sink in the rankings.

Comcast is already bloated: In 2011, it merged with the mammoth NBCUniversal empire, putting it in control of Universal Studios, cable networks like Bravo, MSNBC and USA, and 24 local TV stations around the U.S.

If the merger goes through, Comcast would control way too much of what we see and how we see it online and on cable.

Want more info on why this merger is bad news? Check out these talking points.

Myth: Cord cutters have nothing to worry about.
Fact: Online video and innovation will suffer most.

Comcast doesn’t want you getting your Scandal fix from Hulu or Amazon Prime so it’ll do everything it can to keep you as a subscriber even if you watch all your TV online. That’s what happens when your Internet company is also your cable company.

Myth: Comcast and Time Warner Cable don’t compete anyway, so this deal doesn’t change anything.
Fact: This is all about competition and market power.

The merger will bring us one giant company that controls marquee television and movie content, as well as the primary vehicles — a major television broadcast network, a major cable system operator and a major broadband Internet access provider — for distributing that content.

Myth: The Comcast merger is a boon for Net Neutrality.
Fact: Comcast has to obey the FCC’s Open Internet Order but only until 2018.

First of all, Comcast has long exploited loopholes in these rules to favor its own services and harm competitors. Second, these protections come with a clear expiration date. In the end, the company’s empty promises aren’t any consolation given how the merger will erode our online rights over the long term.

Myth: Time Warner Cable will improve with Comcast’s help.
Fact: Comcast is routinely at the bottom of customer-satisfaction lists.

If Comcast can’t serve its existing communities well, how will expanding help? If anything Comcast will have even less incentive to provide good, reliable service.

Myth: There are plenty of sources for content and information.
Fact: Comcast already has too much control over content.

Because a bigger and badder Comcast would control both content and distribution on a grander scale, it would have both the incentive and the power to limit access to competing content on the distribution platforms it owns. It could also try to outright deny its competitors access to its content.

Myth: I don’t subscribe to Comcast or Time Warner Cable, so this deal has no impact on me.
Fact: This deal isn’t just about dollars. It’s about democracy.

Comcast already wields a great deal of power in Washington: The company spent more than $18 million on lobbying in 2013 alone. The merger would give Comcast an even better shot of ensuring that future communications policies favor its bottom line.

Click here to grab a PDF of the Six Myths Debunked. Share it with your networks far and wide.

Six Myths About the Comcast-Time Warner Cable Merger
We break down the biggest myths and misconceptions about the deal.

Arresting Development: Why the Comcast-Netflix Deal Should Worry You
This hush-hush deal will affect everyone who uses the Internet. And consumers will end up paying for it.

The People Vote No on the Comcast-Time Warner Cable Merger
Activists rallied outside the Comcast shareholders' meeting on May 21 to oppose the merger: 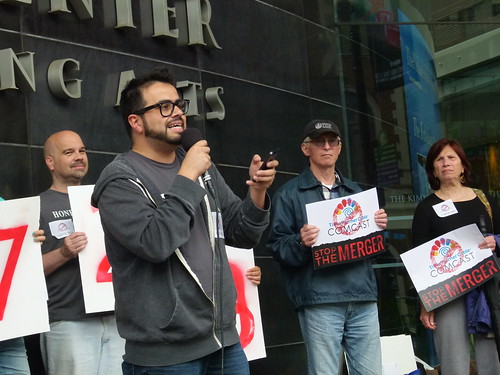 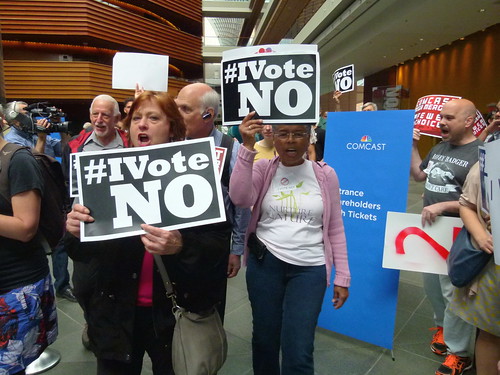 Check out more photos of the rally here.

The Real Problem With the Comcast Merger (The New Yorker)

Tell the FCC what you think of this disastrous merger. 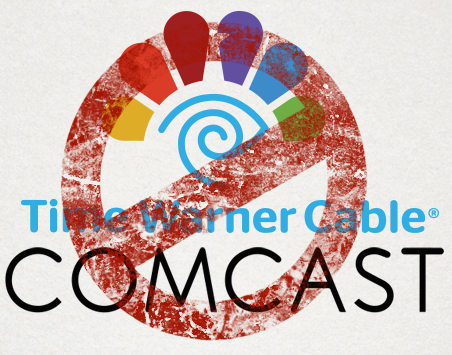 The most popular page of any newspaper is the one featuring letters to the editor. You can use this soapbox to get the word out about the need to stop the Comcast-Time Warner Cable deal. Click here for helpful guidelines on how to craft your letter.

Your gift to the Free Press Action Fund will add muscle to our campaign to stop this merger. We don’t take money from business, government or political parties and rely on the generosity of people like you to fuel our work. Please donate today. Thank you!