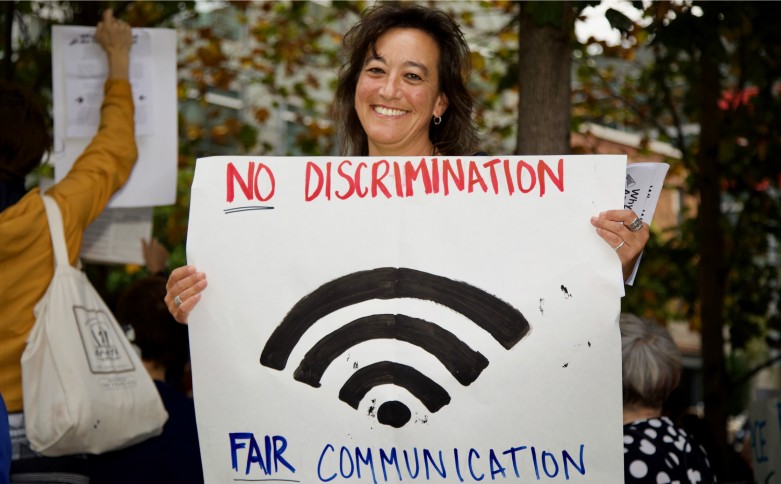 Team Internet: People Power in the Fight For Net Neutrality

We’re seeing an unprecedented level of political engagement in this cultural moment. In the two months since the Internet-Wide Day of Action to Save Net Neutrality, those efforts have crystallized into a decentralized grassroots movement to defend a free and open internet.

Nearly half a million strong, we’re a group of people working together in direct response to threats to Net Neutrality at the Federal Communications Commission and in Congress. We organize alongside hundreds of other organizations and individuals who work on media and technology issues. A small and dedicated staff from three partner organizations — Demand Progress, Fight for the Future and Free Press Action Fund — supports the team.

In just a matter of weeks, Team Internet has inspired nearly 11,000 volunteers to lead and take action in their communities. This has led to hundreds of in-district meetings with lawmakers such as Rep. Debbie Dingell (D–Michigan) and Sen. Elizabeth Warren (D–Massachusetts). In August alone, nearly 400 events took place. Team Internet volunteers have also attended town halls, rallies and protests.

All of this activism is scaffolded by a combination of volunteer-run online and offline activities designed to support self-organizing at the local, state and federal levels. Real-time text conversations happen every day, allowing volunteers to talk directly with the nearly half a million people who signed up to get involved in this effort. Nearly 800 people regularly chat using a Slack virtual office, 1,000 people have participated in special volunteer conference calls and countless one-on-one phone calls provide spaces for volunteers to do their work and connect with others.

Centering race is essential to the work of Team Internet. We strive to create a safe environment that doesn’t allow for racism, sexism, classism, xenophobia or other forms of hate. Our activist efforts prioritize the leadership of women and people of color, and we seek to work alongside the people who are most impacted by the potential loss of Net Neutrality.

Who is Team Internet?

Edward Platt, Deborah Brody and Kirk Leonard are three inspiring activists from Team Internet who have taken action to fight for Net Neutrality.

Platt, a PhD student at the University of Michigan’s School of Information, grew up in a working-class family. He’s passionate about Net Neutrality because of the way the internet has allowed him to engage with information and experiences that go beyond his home life. His passion for protecting Net Neutrality led him to host a Net Neutrality meeting at Rep. Debbie Dingell’s office. Here he is (bottom right) with other Team Internet volunteers:

Leonard, a seasoned activist from Oregon who’s skilled at mobilizing people in his community, has supported other activists as they’ve take steps to meet with local representatives.

Twenty-two people attended the meeting he hosted at the office of Rep. Kurt Schrader (D–Oregon). Among the attendees were a doctor who’s concerned about how losing Net Neutrality could impact his work, a pastor who uses the internet to help children in need find adoptive families, and a college student who relies on the open internet for their studies.

Brody, a nurse who’s concerned about corporate control of the internet, hosted a meeting at the office of Rep. John Larson (D–Connecticut). She’s a savvy activist with a keen understanding of the role institutional power plays in technology policy. She detests the insidious ways in which corporate conglomerates like Comcast are trying to stifle Net Neutrality.

These three are just a small sample of the inspiring activists taking a stand to defeat the Trump FCC’s plan to destroy the internet.

As Demand Progress Director of Operations and Communications Mark Stanley said, “Outside Washington, protecting the open internet isn’t a partisan issue — people across the political spectrum know they need Net Neutrality to preserve free speech online. Team Internet activists will make it clear to all members of Congress that they must stand with their constituents, not FCC Chairman Ajit Pai and Comcast.”

The movement to keep the internet free and open

On July 12, tens of millions of people and 125,000 websites and organizations participated in an online protest to stop Chairman from gutting the agency’s 2015 Net Neutrality protections. This display of people power spawned Team Internet.

Over 100 people gathered to advocate for Net Neutrality in San Francisco on Sept. 12. The rally, which was streamed live on Facebook, took place outside an event where Pai was giving a talk about bridging the digital divide.

CREDO Action Campaign Manager Brandy Doyle highlighted this irony, noting, “Chairman Pai says he wants to bridge the digital divide but the fact is, that will not happen without the Title II Net Neutrality rules that Pai is actively working to reverse.”

At the end of the rally, activists turned the tables on Pai by delivering their Net Neutrality comments in a three-foot-tall coffee mug. Pai’s passion for his own oversized mug has been a running joke since it was parodied on Last Week Tonight with John Oliver.

Net Neutrality is a racial-justice issue

The event, which was streamed live on Facebook, has had 3,500 views. After the call, organizers sent participants a resource list with recommended readings and ways to get involved in the fight for the free and open internet.

Participants also contributed to the conversation. Here are a few comments that arose during the call:

“The stories and voices of people of color are so systematically excluded from mainstream media that the open internet is an essential alternative.” —Jim

“I care about Net Neutrality because no one should be silenced on their beliefs and views just because someone else disagrees with them.” —Tracey

As Free Press Action Fund campaign organizers, we have the privilege to partner with a large and expanding team of volunteers who are committed to protecting the open and free internet. Team Internet could not exist without them.

We’re also so thankful to be in partnership with our friends at Demand Progress and Fight for the Future.

We hope you’ll join the fight for Net Neutrality by going to battleforthenet.com/jointeaminternet/ to take action now. As Fight for the Future Campaign Director Evan Greer noted, “Net Neutrality is the free-speech fight of our generation, and internet users across the country are pissed off and paying attention.”