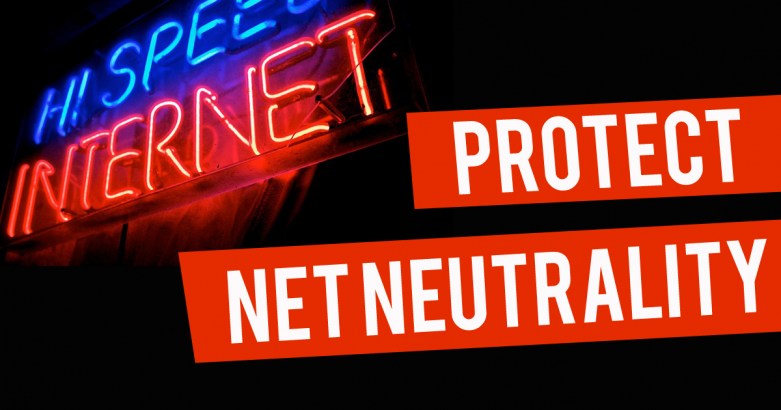 We’re at a critical moment in the fight for Net Neutrality.

The FCC is expected to vote on Chairman Ajit Pai’s plan to destroy the open-internet rules at its Dec. 14 meeting. Our people power is the only thing that can stop the agency from killing Net Neutrality.

We need to tell our members of Congress how eliminating the Title II rules will harm us. And we need to push these lawmakers to put pressure on Pai.

Team Internet, a grassroots-activism campaign coordinated by Demand Progress, Fight for the Future and Free Press Action Fund, was launched last summer to do just that. From lobbying on Capitol Hill to organizing in-district meetings to posting their Net Neutrality stories online, Team Internet activists are making their voices heard.

Kathy Bradley, Anne Dachowski and Daryl Shute are among the hundreds of people who posted their Net Neutrality stories. I spoke with the three of them to learn how they became activists, what inspires them to fight for social change, and what role a free and open internet plays in their lives.

Bradley, a South Carolina native with 33 years of experience as an administrator in long-term care and disability services, was raised in a family that fought for civil rights. “I was taught to think broadly, inclusively and progressively,” she said. Bradley went on to explain how her father, a preacher with a doctorate in religion, and her mother, a special-education teacher and social-justice advocate, taught her to “stand up for what is right and speak up for what she believes in.”

In 1963, Bradley’s parents took her to see Martin Luther King Jr. speak. She immediately noticed the police officers surrounding Dr. King. As a child of a preacher, she was confused by the presence of law enforcement in church. That was the moment Bradley was introduced to the life-threatening nature of fighting racism and White supremacy.

For Bradley, fighting for social change is an integral part of her identity. “It’s in me,” she said. “I can’t sit by and watch thing happen. I will not be quiet.” Pictured below with her mother, Bradley was inspired to found Our Mother’s Voice due to the challenges she faced getting appropriate services for her mother and father-in-law. This nonprofit helps families advocate for loved ones in need of long-term care.

“I established a nonprofit organization, Our Mother's Voice, which relies on the internet to provide essential information to empower advocates who have loved ones in long-term care. I have very little revenue. I cannot afford to pay fees in order to be able to access and share information. Vulnerable people in nursing homes will suffer if their loved ones cannot freely access crucial information about advocating for quality care and services.”

Dachowski, a North Carolina resident who teaches English to adult immigrants, also grew up in a family committed to social justice. Her mom, who volunteered for the NAACP in college, taught her to speak out about White privilege.

Like her mother before her, Dachowski also volunteers for the NAACP. At times, her racial identity leads people to question why she’s involved with the organization. When she gets this unfortunate question, she responds by noting that addressing systemic racism will improve the world for everyone.

Dachowski’s Unitarian upbringing is part of what inspires her to work for social change. The focus on social justice in the Unitarian denomination is closely aligned with Dachowski’s belief that “all humans have value and deserve respect.”

Dachowski is concerned about how destroying Net Neutrality would impact the websites she uses for her health.

“I am bipolar and developed an eating disorder to deal with the mood swings. Two forums for people with eating disorders have been instrumental in my recovery. These are small websites, run on a nonprofit basis, with tiny budgets. They will not survive the repeal of Net Neutrality protections. They will be open to being slowed down or shut down entirely since they cannot afford any more expenses on their minuscule budgets.

“Many people depend on these websites for maintaining their physical and mental health. These are the lives of people we are talking about. The internet isn’t just for movies and games and videos, isn’t just for insignificant recreation. The internet allows people to get peer [support] and professional help in maintaining their health and well-being. Please make sure we keep in place the Net Neutrality protections we have now.”

Shute, a stay-at-home dad from Colorado, has been an activist since he was a child. The visits he made to

migrant farm camps and Black churches with his youth minister helped him understand how income inequality and racism operate in American society.

Shute grew up in Northern California. His father worked for NASA and many people in his local community worked for Lockheed. In 1965, when Shute was in eighth grade, he was the only student willing to argue against the Vietnam War in a classroom debate. Dick Taylor, the minister who helped shape Shute’s identity as an activist, prepared him for the debate.

“I felt like I made a difference by educating my peers,” Shute said. “Later I became a conscientious objector and did not register for the war.”

Today, Shute fights for social justice through his involvement with Just Faith Ministries, a Christian community that engages in social ministry.  “I understand my race and class privilege,” he said. “I’m focused on the inequities of the world and how they can change.”

“The internet has become the landline telephone service of yore. It’s the primary communications vehicle for conveying and receiving information today. Its free access and unfettered, un-manipulated content are essential for a vibrant democracy. Stripping Net Neutrality would turn the internet into a cable-television model — a pay-to-play scenario where those with means receive and/or deliver access and content and those without stay without.”

Bradley, Dachowski and Shute are using their stories to support the fight for Net Neutrality.

There’s still time to join this battle. You can stop Chairman Pai’s egregious and undemocratic attack on the open internet by joining Team Internet. Go to battleforthenet.com/jointeaminternet/ now to tell your lawmaker how losing Net Neutrality would harm you.