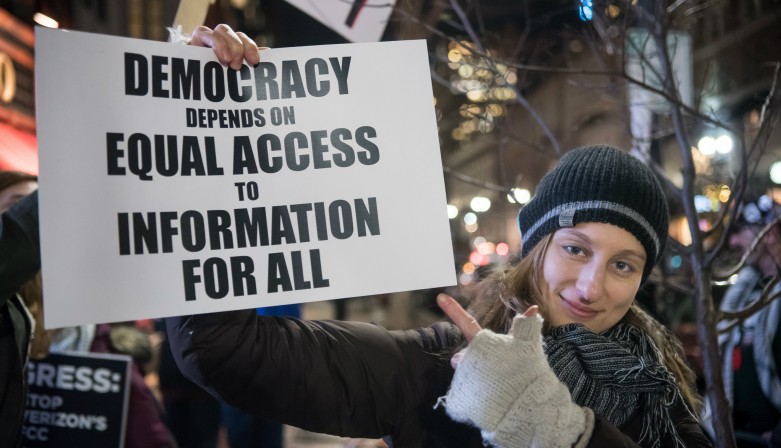 6 Incredible Moments from the Nationwide #StopTheFCC Protests for Net Neutrality

Last week, the people stood up to cable and phone companies in a historic way.

From Hadley, Massachusetts, to Torrance, California, and more than 700 stops in between, activists gathered outside Verizon stores and congressional offices to protest the FCC’s plan to roll back Net Neutrality.

Trump-appointed FCC Chairman Ajit Pai — a former Verizon lawyer — is leading the push to unravel the Obama-era rules that prohibit Verizon and other broadband providers from blocking or otherwise discriminating against online content.

Without Net Neutrality, companies like AT&T, Comcast and Verizon would be allowed to carve the internet into fast and slow lanes, with only a handful of wealthy companies able to ensure speedy access to their content. Pai’s plan would undermine open access to education, health care, community organizing, small business, independent art and more.

In response, tens of thousands of activists gathered nationwide in a stunning display of unity and outrage exactly one week before the Commission’s planned vote. From a day filled with inspiring moments, here are a few of our favorites:

1. The kids are alright in Sioux Falls.

No matter what happens on Dec. 14, we know that the future is bright because of young people like Will Howes, a 16-year-old high-school student and #TeamInternet activist who organized a protest in Sioux Falls, South Dakota. On a night when the low temperature reached a bone-chilling 3°F, Will and his classmates braved the cold to speak up for Title II Net Neutrality — and got rewarded with a feature in the local paper.

Brutal cold and a lot of snow didn't stop a couple of dedicated Net Neutrality activists from showing up outside the Verizon store in Fairbanks. If there’s a prize for dedication to the cause, these folks might just win.

3. Blanket coverage in the Bay Area.

The Bay Area has a storied history of activism — and Dec. 7 did not disappoint.

4. Boston protesters are no Scrooges.

Thanks to the uber-creative folks at #protestchoir, the Boston demonstration featured a rousing round of remixed holiday carols. Some of the titles included: “Hark! Neutrality!,” “I’m Dreaming of the Free Network,” and “Oh FCC.” Check out a video of this incredible group.

5. Freedom fighters unite in the Windy City.
Intersectionality was the key in Chicago. Immigrant-rights activist and Cook County Commissioner  Jesus “Chuy” Garcia spoke about the importance of internet access to the Latinx community while Black Lives Matter activist Kofi Ademola highlighted how the open internet has helped efforts to resist police violence. Watch video of the protest provided by Indivisible Illinois.

6. Protesters get the last laugh in Washington, D.C.

Activists in the nation’s capital were able to bring their protest to the doorstep of Ajit Pai when he hosted the annual Chairman’s Dinner (#TelecomProm) at the luxurious Washington Hilton. While Pai joked about destroying internet freedom for an audience of lobbyists and insiders, protesters outside highlighted what’s at stake.

In a bold move, FCC Commissioners Mignon Clyburn and Jessica Rosenworcel both stopped by the protest and used the bullhorn — and later, Twitter — to lend their voices to the opposition to Pai’s plan. Watch the Act.TV livestream of the D.C. protest to see their remarks as well as footage from other major cities.

When the Net Neutrality fight began more than 10 years ago, it was considered a fringe issue that mattered only to tech nerds and politicians. Dec. 7 showed that this issue has entered a new level of mainstream consciousness, grabbing the attention of major media and even prompting a few lawmakers to clarify their position on the Title II Net Neutrality rules in response to their constituents.

The message was overwhelmingly clear: The open internet belongs to the masses, and the masses refuse to let it die.

If you were unable to join the #StopTheFCC protests, don’t worry — this fight is far from over. Should the FCC go through with its disastrous vote, Free Press and others are prepared to sue the federal agency in court.

None of it will be possible without you, however, so join #TeamInternet and stay involved. Get inspired by the events of Dec. 7 and carry that energy with you into the continued battle ahead.

The future of the internet is hanging in the balance.