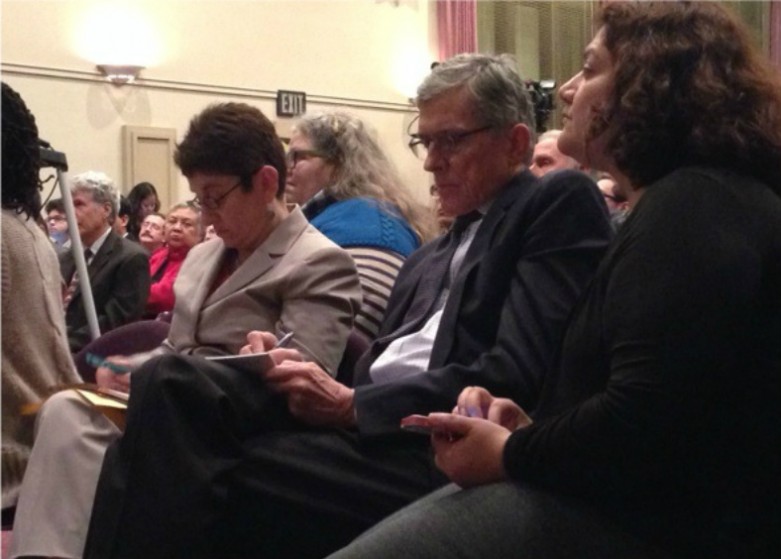 New Federal Communications Commission Chairman Tom Wheeler took part in a standing-room-only town-hall meeting Thursday night in Oakland, where he heard from Bay Area residents about the impact of media policies on their lives.

And as Mr. Wheeler quickly learned, the people had a lot to say.

Voices for Internet Freedom, a coalition of close to 30 organizations representing people of color, hosted the gathering. The coalition is led by the Center for Media Justice, Free Press, ColorOfChange and the National Hispanic Media Coalition.

Throughout the night, Chairman Wheeler heard moving testimonies from speakers on a variety of issues, including damaging media stereotypes, the ways in which corporate media excludes people of color, and the critical need for marginalized communities to access affordable phone and broadband services.

Seventeen-year-old Oakland Youth Poet Laureate Obasi Davis set the tone for the evening with a reading of his poem, “The skin the sun gave me,” which explores the media’s depiction of African Americans:

Through television screens and radio stations

Images of black men degrading themselves litter the nightly news

Center for Media Justice Executive Director Malkia Cyril said we need a media system that is affordable, accessible and accountable to the people. We need this, she said, the same way we need a healthy nervous system to deliver information for our bodies to function.

“Oakland, like many cities with large populations of people of color, is no stranger to negative media stereotypes,” said Cyril. “This pattern of misrepresentation isn’t the result of a handful of bad journalists. It’s the result of a media that is being gutted by corporate interests and left unprotected by regulators.”

Speakers throughout the evening called on Wheeler to tackle our nation’s media inequality by adopting policies that give marginalized communities opportunities to tell their own stories. Speakers also pushed Wheeler to guarantee our nation’s communications networks are accessible and affordable.

Several speakers stressed the importance of Net Neutrality in ensuring the open Internet allows people of color to keep each other informed and mobilize against injustice.

ColorofChange Executive Director Rashad Robinson said that Net Neutrality has allowed his organization to amplify the voices of communities of color and enabled people to organize for racial and social justice.

Jack Walsh, the executive director of the National Association for Media and the Arts, added that Net Neutrality allows media makers to tell the kinds of authentic stories about their communities that are overlooked elsewhere.

Indeed, runaway consolidation — and the journalist layoffs that accompany it — has made it harder for marginalized people to have a voice in the mainstream media.

National Association of Black Journalists President Bob Butler noted that only 12 percent of TV stations that responded to his organization’s recent survey employ a person of color in a management position. He urged Wheeler to collect the employment data of broadcast stations.

Newspaper Guild Secretary Treasurer Sara Steffen said the number of journalists working in the Bay Area has declined in the wake of the MediaNews Group’s purchase of several major dailies.

While telling our own stories was a major theme of the evening’s remarks, so was the call for the FCC to foster affordable access to phone and broadband services.

Ana Montes, the director of organizing at The Utility Reform Network, noted that the comment “it costs more to be poor” is a common refrain heard from those trying to sign up for government services like the Lifeline program, which subsidizes basic phone service. It's often too challenging, she added, for low-income residents to comply with the requirements needed to prove eligibility.

Karen Gonzales, whose son was sentenced to a 20-year sentence when he was just 17, urged Chairman Wheeler to continue reforming the high prison phone rates. The cost of those calls, she said, has made it difficult for her to remain connected with her son.

The technologies we use to communicate are changing, but our need to communicate with each other is not.  Yet lobbyists for companies like AT&T are using these changes to suggest that they shouldn’t be required to provide universal, reliable and affordable services. Without federal regulations, said Edyael Casaperalta of the Center for Rural Strategies, rural and remote communities will be stuck with poor service or no service at all.

“Technologies change but the need to communicate and participate in our society does not,” she said.

Wheeler closed the event expressing concerns about the harms of media consolidation, including the practice of companies using shared services agreements to own or control more than one station in a market.

Wheeler took notes throughout the night and referred to them during his closing remarks. In his speech he referred several times to the evening’s speakers.

It was easy to feel impressed with how Wheeler listened so intently throughout nearly two hours of testimony.

Now we’ll see whether he heeds the voices he heard after he returns to Washington.

Watch #Oakland Voices: A Town Hall on Our Right to Communicate.