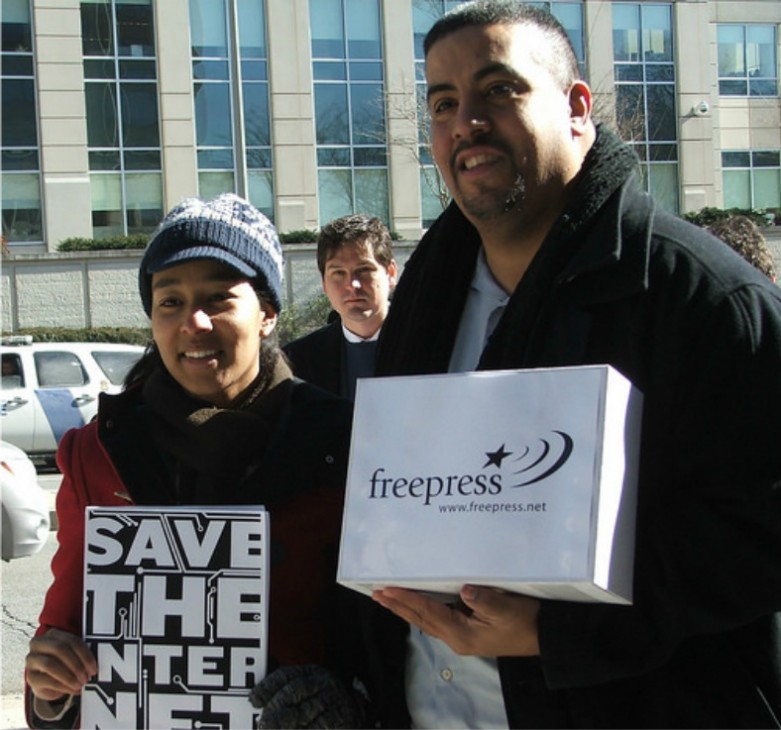 At a community town hall in Oakland earlier this month, FCC Chairman Tom Wheeler said, in reference to his previous gig, “I was a typical Washington player.”

“My goal now,” he added, “in my new job, with my new responsibility, is to learn by listening.”

We were grateful that the chairman acknowledged that he needed to listen to learn.

This is why my colleague Jennifer Gmerek and I joined a Free Press-led coalition of groups today to deliver more than a million petitions to Chairman Wheeler, demanding that the FCC take action to restore the Net Neutrality rules and protect everyone’s right to connect and communicate freely online. We’re calling on the agency to take action to restore those rights under the law.

We hope that Chairman Wheeler will hear that message loud and clear.

Earlier this month, a federal court struck down the FCC’s Net Neutrality rules, which were intended to prevent Internet service providers like AT&T and Verizon from blocking or discriminating against content online.

Despite the ruling, the court did not challenge the FCC’s rationale for adopting Net Neutrality rules. Rather, it challenged the Commission’s authority to craft and enforce those rules under the legal framework it had adopted.

The million-plus petitions delivered today call on the FCC to reassert its authority over broadband networks and pass strong Net Neutrality rules.

The critical need for an open communications system should not be up for debate.  And protecting the open Internet isn’t about resolving disputes between large companies, which is how this issue is often framed in Washington.  It’s about protecting the First Amendment rights of everyday people to speak freely online, and to connect and communicate without being blocked, discriminated against or interfered with.

Chairman Wheeler leads an agency whose primary purpose is to protect the public interest — the interests of people who signed the petitions we delivered.

But it isn’t certain that he will do just that.

Chairman Wheeler hears regularly from the Internet gatekeepers that have made it clear they want to censor and discriminate.

The petitions delivered today demonstrate that people fundamentally understand the importance of protecting Net Neutrality. They understand it is the right thing to do.

We hope the chairman listens and hears those voices.

To read our letter to the FCC, click here.

Check out the video below to watch us and our allies deliver 1 million petitions to the FCC.